Round 26: The Curious Camaraderie of Code

Here are the Hackpad presentation notes from Round 26: The Curious Camaraderie of Code.

Benjamin is part of a team that develops report cards for schools around DC http://learndc.org/. They are pretty! Benjamin however, wanted the data to be more accessible so others could develop more applications, so he wrote an R package that connects to their API.

Comments: The data still needs to be wrangled and much works needs to be done (for example what does BL7 mean?).

hack your brain for the dopamine rushes!

Fitbit lies! …. or at least doesn’t give all the data. Steve thinks he lacks the genetic disposition for exercise, so he needed to hack his brain. The day his fitbit died he started working on a device, an Arduino Uno R3 with a GPS logger and other parts – and put the whole thing in a fanny pack. Now he has all the data!

Q from Steve: Anyone have experience plotting GPS tracks? Can you recommend tools/frameworks/libraries? If you can, contact him!

Harlan is part of a lot of data-related meetups, Data Science DC, et al. He often introduces these meetups by showing a plot about … the meetup attendance itself! While deliciously self-referential, this took too much time so Harlin hacked together a shiny app that uses data from the official API itself.

His app plots the data from meetup that shows the RSVP and headcounts automatically (for groups that enter their headcount). More data is there for the future: event data, each member, their cross-group joins and their public posts … so much to do!

Jan wanted to show off a project he had been working on to help scientists (and non-scientists) understand and share their data. He went through a meta-analysis example, to show how easily we can aggregate a bunch of disparate scientific reports in one place.

Problem: “I waited until the last minute to get a costume for Halloween”.

Eric detailed his laser blaster arm (not real lasers, but LED’s), showing the components that were “interesting”, the voltage divider and resistor capacitor circuit.

It's 🎃, what is Eric to do besides build his own #laser suit out of cardboard & circuit boards #hackandtell pic.twitter.com/qq29OKdlY2

While “only” a web developer, Jim built an uber-cool little device, a small piece of hardware that uses infrared to detect blinks. He used an Arduino board with IR sensor to relay that information to have a computer do something when you blink.

Since a typical blink lasts 100-400 ms, it turns out you can show pictures of literally in the blink of an eye. Like the Hoff … what else would you show?

Also, he showed a little demo of flappy bird – played with blinking.

Jim blinks, as many of us do, except he built a detector for that. #hackandtell pic.twitter.com/KMiENAv8nM

A man who values music distribution over his safety. Is this the hero we need?

rektide built a bike with over 30 lbs of speakers attached including both the amp and the batteries.

Jokes asides, this man has 100 volts between his legs. He, “used Velcro so he didn’t die”, which seeing that he was still giving a presentation must have worked pretty well. Parts and pieces were pretty simple – with the original version taking an hour to setup and the new improved version on 15 minutes.

He also played some awesome tunes w/the bike for us.

John wants to take his deep learning on the go so he experimented with building a custom case to house a Jetson TK1 NVIDIA processor (a 192 core graphics card).

After a lot of work he realized he could enclose the entire thing in a sandwich box instead – how’s that for under-engineering! 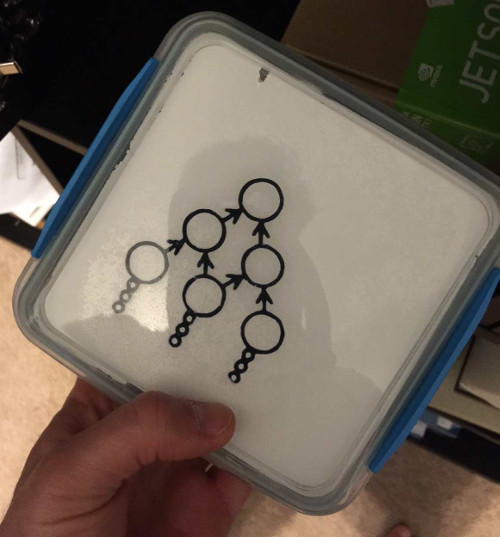 Bro do you even science?

He then downloaded the http://arxiv.org/ (because that’s what Travis does) and trained this machine on all categories with the same set of hyperparameters.

He then generated fake article titles: scientists couldn’t figure out which were real!

This hack was inspired by a Medium post she wrote: What do suicide attacks look like globally?

Thanks to everyone who presented, everyone who attended, @metasemantic for the writeup, @LauraNLorenz for the pictures, and of course thanks to our favorite WeWork for hosting!

Round 27: Hyperion Christmas Carols is already scheduled, so RSVP and sign up to present!